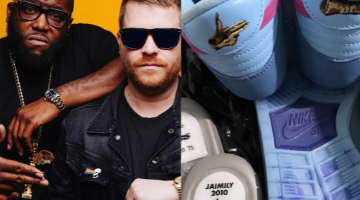 Run The Jewels have teamed up with Nike for an exclusive SB Dunk High release. It is rumored that the shoe will release in April 2023.

Nike will be home to Run The Jewels. In a first look at their Nike SB Dunk sneakers, both high and low, El-P and Killer Mike released a video on Friday (November 19). With jewel-styled Swooshes and neon yellow shoelaces, the high version has a black and fuchsia upper. Additionally, it features lace locks inspired by the duo’s signature logo. It is rumored that Killer Mike’s 48th birthday coincides with the release date of the Run The Jewels x Nike SB Dunks collaboration.

The forthcoming RTJ x Nike SB Dunk Low has suede panels in blue shades, with notes of yellow along the tongue. Between the heels, buyers can find the infamous two-hand logo where the Nike branding usually is. 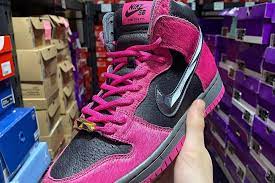 The Nike Dunks were last seen on Killer Mike and El-P during a performance in Mexico City. In addition to Akapellah, Baco Exu Do Blues, the Mexican Institute of Sound, Sarah La Morena, Trooko and others, the duo is promoting their new remix album, RTJ CU4TRO.
When the album was released in October, El-P made a statement about it.
The album reimagines RTJ4 by using collaboration and blending a variety of musical influences and cultures… It’s a rare opportunity for us to get down with, create with, and connect with people we may never have been able to meet if we hadn’t been lucky enough to be able to put it all together.”