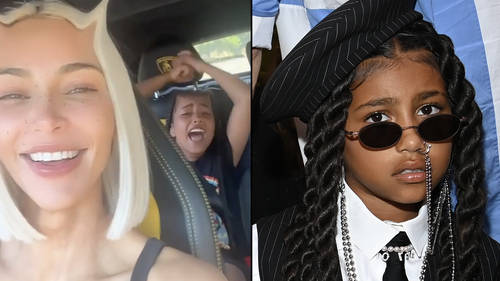 North West appeared visibly embarrassed and repeatedly attempted to duck out of view as Kim Kardashian filmed her.

In a short clip posted to Instagram yesterday (Aug 18), Kim is in the car with her daughter North and Kourtney’s daughter Penelope Disick as they all singing along to Bruno Mars’ bop ‘Versace On The Floor’.

“Sing it, girls!,” Kim tells the kids in the back. But as Kim continues to lip-sync along to the song, North screams, “Stop! Mom! Mom, please delete that!” Kim laughs along, ignoring North’s comments before the video cuts to North laughing and holding up a fist as Kim gasps as her daughter’s reaction.

While some thought the video was funny, others shared their more critical takes concerning North’s request to delete the video.

Another added: “Why would she post this? North is unhappy and explicitly asks her to please delete it. This feels so invasive. She’s only 9, she shouldn’t have videos she doesn’t like of herself online for millions of people to see.”

While Kim and North’s joint TikTok allows North to have control of what videos she shares of herself online, the 9-year-old has been pretty vocal about when she doesn’t want people to film or take pictures of her.

Last month (July), North held up a sign saying “STOP” while attending the Jean Paul Gaultier show at Paris’ Haute Couture Week. Explaining North’s reaction on social media, Kim wrote: “For anyone who knows North knows how funny she finds this video! North I guess had it with the people taking pictures of her so she wrote on her invite STOP and held it up and wanted them to just focus on the show…”

Another video of North also went viral recently of her shushing a crowd of screaming fans who were waiting for her, Kim and Chicago West to exit a store.