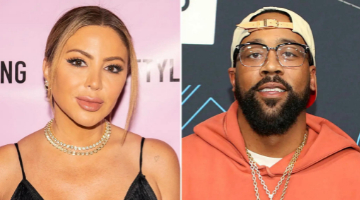 Larsa Pippen is clearing a narrative attached to her romance with Marcus Jordan. The former wife of Scottie Pippen claims Marcus is a newcomer in her life amid online suggestions that she knew him as a child.
The 48-year-old stepped into The Shade Room‘s comment section on Instagram with the clarification. She explained her link with Marcus after a viral video showed someone loudly teasing her “cold” ways during an outing with the 31-year-old.
“I just met him 3 years ago, I never knew him or his family. I was 21 years old and in college when Scottie played that one year w MJ, and we weren’t friends with them like everyone thinks,” Larsa wrote.

”
Pictures Seemingly Contradict Larsa’s Claims
Larsa’s comment is correct–to some degree. She tied the knot with Scottie in 1997. Jordan and Pippen were teammates on the Chicago Bulls from 1987 to 1993 and then again from 1995 to 1998, per Bleacher Report.
However, Larsa’s claims of a limited relationship between Michael and Scottie are murky. For one, Pippen and Scottie won six championships, making them arguably one of the best duos in basketball history.

And off-the-court, Jordan presented Pippen during his induction into the Basketball Hall of Fame in 2010. Then in 2012, Jordan and his now-wife, Yvette Prieto, attended a surprise birthday party for Pippen.
CHICAGO, IL – SEPTEMBER 24: Michael Jordan, Yvette Prieto, Larsa Pippen, and Scottie Pippen attend the surprise birthday celebration for Scottie Pippen at Sunda on September 24, 2012, in Chicago, Illinois. (Photo by Barry Brecheisen/WireImage)

By April 2013, Larsa and Pippen were guests at Jordan’s wedding with Yvette in Palm Beach, Florida. Unfortunately, Larsa’s comment on The Shade Room fails to address these link-ups in the years since her former husband and boyfriend’s father dominated NBA courts.

Larsa’s Dating History From Scottie To Marcus
The Real Housewives of Miami castmate and Scottie finalized their divorce in December 2021 after 19 years of marriage, per Insider. Scottie reportedly first filed for divorce in 2016, and Larsa filed behind him. Though she says, their separation began in 2015.
People reports that the initial filings happened after Larsa told police Scottie was verbally abusive in a series of leaked voice recordings. However, the couple reconciled in February 2017, but by November 2018, Larsa filed again. They settled their divorce more than three years later, in December 2021. They share four children that are in their teens and 20s.
Larsa’s alleged dating history since her separation isn’t without drama. In 2020, she confirmed she once had a “respectable relationship” with Future after the first separation, in which he was “very romantic.”
In May 2021, she exchanged online insults with Montana Yao after dating her husband, Malik Beasley. At the time, she claimed, “Malik was a clout chaser who pursued me relentlessly before I even knew you existed. And I have the DMs, but then again, he knows that.”

Now, Larsa is romantically linked to Michael Jordan’s youngest son Marcus. They’ve been spotted together since September, including a concert date at Rolling Loud NYC, the beach, and a night out in Miami. Sources told TMZ Larsa, and Marcus made things official about mid-October–about a month after claiming they were just friends.

Marcus is the owner of Trophy Room. The online boutique sells apparel, footwear, and memorabilia inspired by his father’s trophy room–the same one Michael likely filled with wins secured alongside Pippen!
The post Larsa Pippen Claims She Didn’t Know Marcus Jordan Or His Family While Married To Scottie Pippen appeared first on The Shade Room.