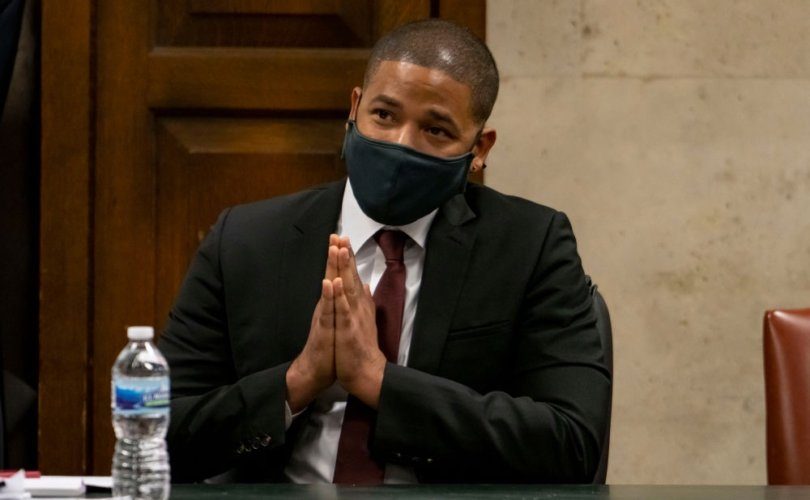 The ex-Empire actor spent six days behind bars and reportedly refused to eat while he was incarcerated.

Convicted actor Jussie Smollett has been ordered released from jail pending appeal of his conviction and 150-day sentence for staging a hoax hate crime on himself.

The one-page order issued by the Illinois Appellate Court on Wednesday afternoon stated that Smollett was to be released from the Cook County Jail after signing a $150,000 recognizance bond, which would not require him to post any money. The only explanation offered in the order was that Smollett has never been convicted of a violent offense and would have completed his sentence of incarceration well before his appeal is decided.

Smollett’s impending release after seven days in custody marks the latest twist in a roller-coaster case that has captivated Chicago ever since the then-”Empire” actor reported to police that he was attacked outside his downtown condo in January 2019 by two men who shouted racist and homophobic slurs and put a makeshift noose around his neck.

The release order comes just two days after Smollett’s attorneys asked the appellate court to release the actor from jail while his appeal is pending, arguing that Smollett’s time in custody could put his mental and physical health at risk.

Special Prosecutor Dan Webb opposed the move, writing in a motion Wednesday that Smollett relied “on half-truths and misleading statements, at best, to manufacture an alleged emergency” and win his release on bond.

“Not only is Smollett not being held in solitary confinement, but the Cook County sheriff’s office (has) made public the specific measures that are being taken to ensure the health, safety, and wellbeing of Mr. Smollett while he serves his jail term,” Webb wrote.

Smollett’s attorneys were expected to hold a news conference outside the sprawling jail complex on Wednesday evening.

Smollett has been housed in protective custody since his sentencing last Thursday, with cameras in his cell and an officer with a body-worn camera outside his door at all times, according to the sheriff’s office.

At his attorneys’ request, a judge ordered Smollett placed in Smollett will have no contact with other detainees, but can have time outside his cell to make phone calls and watch TV, the office has said.

Smollett was convicted of low-level felonies in December when a jury found that he had lied to police about being the victim of a hate crime attack. Prosecutors argued at sentencing that he denigrated real victims of hate crimes when he staged a phony assault on himself involving racial slurs, homophobic epithets and a noose.

Judge James Linn sentenced Smollett to 30 months of probation, with the first 150 days to be served in Cook County Jail. In addition, he must pay a $25,000 fine as well as $120,106 — the amount of restitution the city sought to pay for its overtime costs investigating the case, minus the $10,000 Smollett forfeited to the city when his first case was dropped.

Smollett declined to speak before sentencing, but after Linn handed down his decision, Smollett surprised the whole courtroom by standing up to proclaim his innocence.

“If I did this, then it means I stuck my fist in the fears of Black Americans in this country for over 400 years, and the fears of the LGBT community,” he said. “Your honor, I respect you, and I respect the jury, but I did not do this. And I am not suicidal, and if anything happens to me when I go in there, I did not do it to myself.”

As he was escorted out of the courtroom, Smollett threw a fist in the air and yelled, “I could’ve admitted I was guilty a long time ago!”

Earlier this week, Smollett’s legal team released a video message from Smollett’s younger brother, Jocqui, who said his brother was holding up under difficult circumstances.

“He is very stable, he is very strong, he is very healthy and ready to take on the challenge that ultimately has been put up against him,” Jocqui Smollett said in the video.

The family also released audio of a menacing phone call received by one of Smollett’s siblings, which uses racist and homophobic terms and threatens harm to Smollett in jail.

The sheriff’s office countered with a statement urging the family “to report these alleged calls to local law enforcement.

“As with all individuals in custody, the safety and security of Mr. Smollett is the Sheriff’s Office primary concern,” the sheriff’s office said.