Actor Jason Momoa is known for quite a few things. Some of those things are his movie roles, distinctive tattoos, and most commonly his hair. On Monday, he decided to make a change to his look, by shaving off his hair while relaying a certain message.
In a video posted to his Instagram account, Jason shared that he was shaving his head as he encouraged his supporters to limit single-use plastics. At the start of the video, he asked the woman that was shaving his hair off to hand him his braids. As he showed the camera the braids, he said,
“Do it for single-use plastics. I’m tired of these plastic bottles. We gotta stop, plastic forks, all that sh*t. It goes into our land, it goes into our ocean.”
He continued, “Please, anything you can do to eliminate single-use plastics in your life, help me.”

Jason also said in his caption for the video, “Here’s to new beginnings let’s spread the aloha. Be better at protecting our land and oceans. we need to cut single-use plastics out of our lives and out of our seas. Plastic bottles, plastic bags, packaging, utensils all of it. Let’s aloha our ‘āina together aloha.”

The actor made an unexpected change for a meaningful cause.

Aquaman and the Lost Kingdom star Jason Momoa is taking a stand against ocean pollution by making a shocking change to his look.

The actor recorded himself getting his head completely shaved, even showing two cut-off braids to the camera, before posting it on Instagramwith an important message about stopping the use of plastic bottles, utensils, and other things that end up polluting the ocean and elsewhere.

In the video—as he said goodbye to his long, wavy hair—Momoa started explaining why he was doing it, saying, “Shaving off the hair, doing it for uh,” before wincing after feeling the wind on the shaved side of his head.

He continued, “doing it for single-use plastics. I’m tired of these plastic bottles, we gotta stop, plastic forks, all that s**t. Just goes into our land, goes into our ocean.”

Momoa then described seeing trash in the ocean where he is, and said, “It’s just so sad, so please, anything you can do to eliminate single-use plastics in your life. Help me.”

In the caption, he wrote, “heres [sic] to new beginnings let’s spread the aloha. be better at protecting our land and oceans.”

The 43-year-old also tagged his company Mananalu Water, which he created to help remove plastic from nature. As the website states, “As a Certified Plastic Negative product, Mananalu removes twice as much plastic from nature as we use, made possible by our partners at rePurpose Global. We call it Drink One, Remove One.”

To get more specific, “rePurpose Global collects, processes, and reuses multi-layered plastic packaging recovered in Bekasi, Indonesia,” along with other ongoing projects and efforts. If you’re also curious as to how aluminum bottles help the environment, the site explains that they are “easy to recycle and infinitely recyclable. In fact, nearly 75 percent of all the aluminum ever produced is still in use today.”

Various conservation organizations, like Greenpeace USA and Sustainable Coastlines Hawaii, commented in support as well, with the latter writing, “mahalo for advocating to create a better world for future generations to come. spreading aloha not just to the people around us but the places that provide for us. Aloha ʻĀina 🫶.” 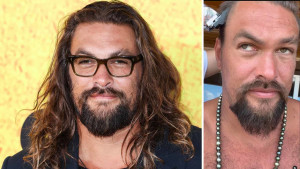 The “Game of Thrones” actor chronicled the monumental haircut on Instagram, posting a video of the process on his feed on Monday.

In the video, Momoa held up two braids the hairdresser had just cut, explaining to his fans he decided to shave off his hair, joking that he has never felt the wind blow on the newly shaved area of his head. He continued to speak to his fans while the hairdresser shaved the remainder of his head. Momoa explained the reason behind shaving his head, sharing that he is doing so in order to raise awareness about the negative side effects of single-use plastic, and to encourage his fans to strive to eliminate it from their lives.

I’m tired of these plastic bottles. We got to stop,” he said. “Plastic forks, all that s–t. It just goes into our land. It goes into our ocean. I’m here in Hawaii right now and just seeing things in our ocean, it’s just so sad. So please, anything you can do to eliminate single-use plastic in your life, help me.” Momoa brought up the fact that reusable aluminum water bottles are widely available nowadays, and the plastic alternative is no longer necessary.