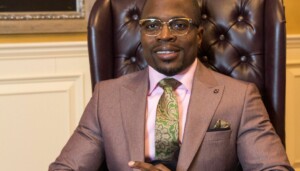 Bishop Whitehead, who was robbed during church service of $1 million worth of jewelry is now in the headlines for allegedly stealing money!

The Brooklyn pastor who says he was robbed in the middle of giving his Sunday sermon stole $90,000 in retirement savings from one of his own parishioners, a lawsuitfiled last year in Brooklyn Supreme Court alleges.

Lamor Whitehead, the bishop at Leaders of Tomorrow International Churches in Canarsie, is accused of convincing 56-year-old Pauline Anderson to invest nearly her entire life savings in one of his firms — with the promise that he could help her buy a home despite her bad credit history, the court papers say.

Anderson wrote Whitehead a $90,000 cashier’s check in November 2020 and relied on him to give her $100 monthly allowances to pay for her living expenses, according to the lawsuit.

After months went by in early 2021 without the monthly payments or progress on the home purchase, Whitehead allegedly told Anderson that he was treating her investment as a donation to his then-campaign for Brooklyn borough president.

He said he had no obligation to pay it back. 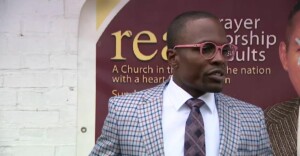 “Mr. Whitehead fraudulently induced Ms. Anderson to liquidate her entire life savings to pay him the ‘investment’ of $90,000.00, promising to use the funds to purchase and renovate a house for her,” alleges the lawsuit.

“Ms. Anderson was instead left with nothing but a vague promise by Mr. Whitehead to pay the funds back in the future followed by an assertion that he had no further obligation to do so.”

Anderson declined to comment through a family member, who said Anderson didn’t want to talk because the litigation is still pending.

Whitehead, who shared a close relationship with Mayor Eric Adams when Adams served as Brooklyn borough president, didn’t respond to a message left with his church on Wednesday. He has in the past served time in state prison following convictions for identity fraud and grand larceny.

A message left for Whitehead’s attorney wasn’t immediately returned. On Thursday after this article was published, Whitehead told the Daily News that Anderson was being untruthful.

“Her son was a member of my ministry who was removed because he was unintegral. It’s a lawsuit because of who I am,” he said, adding: “Everybody that tried to sue me because of my celebrity status is just gonna keep going in trying to do what they do.”

Video that went viral on Sunday shows three men clad in black robbing Whitehead and his wife of their pricey jewelry in the middle of his sermon shortly after 11 a.m.

One of the men appears to put a gun in Whitehead’s back as he collects the jewelry, which was reported at being valued between $400,000 and $1 million.

Whitehead, a pastor known for Instagram videos displaying his high-end tastes in cars, clothes and real estate, has offered $50,000 to information leading to the arrest of the alleged bandits.

Anderson’s son Rasheed Anderson was the one who introduced her to Whitehead shortly after she became a church parishioner in January 2020, the lawsuit says.

She had just recovered from life-threatening surgery and Whitehead had offered to join her on a phone call to pray for her health.

In July 2020, Anderson connected with Whitehead about her desire to buy a home, seeking help from him in addressing her bad credit history and getting assistance in locating a house.

Whitehead soon got Anderson the phone with two money lenders who told Anderson she’d have a tough time getting a loan to buy a house. That’s when he offered to help her himself, if she would invest her money in his firm, Lamor Whitehead Inc.

The court papers say she expressed reservations because she had no other income besides the savings, which is when Whitehead offered to give her the $100 monthly allowances while he sought a suitable home for her to buy. 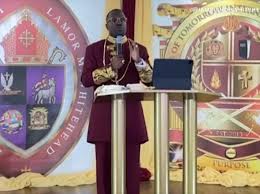 She got no receipt for the $90,000 cashier’s check she wrote to Lamor Whitehead Inc in November 2020, according to the court filing.

After the first monthly allowance was paid out in January 2021, Whitehead essentially disappeared and cited his campaign for Brooklyn borough president as the reason why he was too busy. He said Anderson’s money had been invested and wasn’t easy to access, according to text messagessubmitted as exhibits to the lawsuit.

On May 19, 2021, text messages submitted as evidence to the lawsuit allege Whitehead told Anderson, “And for the record anything that was given to me is a Donation unless it’s attached to a contract! I was making investments that’s what I Do!”

In the texts, Whitehead also addressed Anderson’s son, claiming “the devil” was “using him.” In response, Anderson expressed her disappointment in the preacher.

“All of this because of what? Because you took money that you refuse to pay back and now you’re quoting scripture to serve your purpose! This is so offensive and did you just go there. You said you were a man of integrity!” she wrote.

In July 2021, Whitehead apparently accidentally emailed Rasheed a copy of a contract for a purchase Whitehead was making of a $4.4 million mansion in Saddle River, N.J.

The lawsuit claims Whitehead used the $90,000 from Anderson as a down payment on the contract for that purchase, but public records show the purchase never went through.

Whitehead did complete a purchase of a half-block of apartments in Hartford, Conn., later that year, through his firm Whitehead Estates, LLC, public records show, borrowing $4.15 million from a Brooklyn mortgage company in December 2021 and then boosting the mortgage to $4.5 million in February 2022.

He also owns a home in Paramus, N.J., that he bought for $1.6 million in 2019, according to public records. When THE CITY paid a visit to the Paramus home on Thursday, a default notice for the Hartford property was affixed to the front door, dated July 25, 2022. It declared that Whitehead had not made mortgage payments since at least June 1. Anderson isn’t the first person to accuse Whitehead of defrauding them of significant sums of money.

In 2016, the New York Post reported that Whitehead still owed Monterey Symphony conductor Maximo Bragado-Darman $260,000 for a prior court judgment over an unpaid personal loan.

That loan has also involved an alleged real estate transaction.

Bragado-Darman’s attorney didn’t respond to a voice message seeking an update on that case.

Whitehead previously served five years in Sing Sing prison for multiple counts of identity fraud and grand larceny before being released in 2013.

Despite his checkered history, Whitehead has enjoyed a close relationship with Mayor Eric Adams, particularly during Adams’ eight years as Brooklyn borough president.

Adams has appeared at numerous public events alongside Whitehead, and in August 2016 introduced Whitehead at an outdoor concert in Brooklyn as “my good friend and good brother.”

More recently, in the aftermath of the high-profile shooting of a Goldman Sachs employee on the Q train in May, Whitehead tried to help Adams with negotiations to get the suspect, Andrew Abdullah, to turn himself in. Whitehead hoped to personally escort the wanted man to the mayor, but police ended up arresting the suspect outside of the Legal Aid Society’s office in Manhattan.

“No one in this city should be the victim of armed robbery, let alone our faith leaders and congregants worshiping in a House of God,” Adams told the Daily News on Monday. “The NYPD is investigating this crime and will work tirelessly to bring the criminals involved to justice.”