The Atlanta Braves World Series rings have been revealed after the team won the 2021 championship game.

The Braves opened up their 2022 season Thursday but had to wait until before Saturday’s game against the Cincinnati Reds to reveal their 2021 World Series rings, the Bleacher Report reported.

The ring by itself has 755 total diamonds, 44 emerald-cut diamonds, and working lights on the inside.

And that’s not the only feature. It also has 11 rubies to symbolize the landing spots of the 11 home runs the team hit in the World Series.

The Braves beat the Houston Astros in six games during last year’s World Series to capture their first title since 1995.

Ring one-upping has become a tradition among MLB teams, and it was the Atlanta Braves’ turn this year.

The defending champions unveiled their 2021 championship ring on Saturday, with the usual suite of tortured math and unique touches from their improbable playoff run. Players received their rings in a ceremony before a game against the Cincinnati Reds.

Special numbers included 18.71-karat white gold in honor of the Braves’ founding in 1871 (as the Boston Red Stockings), 150 diamonds on the “A” to denote the team’s 150th anniversary last year, 755 total diamonds as a Hank Aaron tribute, 44 emerald-cut diamonds on the side as another Hank Aaron tribute and a pearl on the side in honor of Joc Pederson’s unusual pearl necklace fashion choice.

The real show is inside the ring, however, as it opens up to reveal a replica of Truist Park with working mini-stadium LED lights, said to be a first in championship ring history.

The Braves revealed even more interesting details in a subsequent breakdown. The ring also features 11 rubies representing where the team’s 11 World Series home runs were hit and 2021’s trade deadline inscribed on the inside, along with the player’s signature and series results.

If there was a team in MLB history that was going to put the trade deadline on its championship ring, it is the 2021 Braves.

Best of luck to anyone who have to replace those lights in the future, though. Those probably aren’t available at Home Depot. 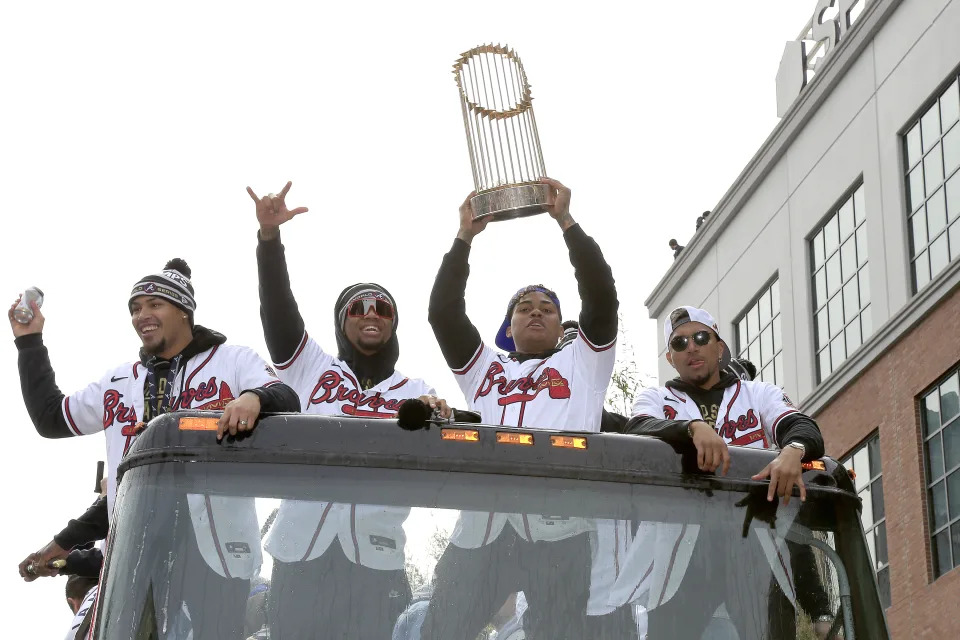 The Braves’ World Series ring is as wild as their 2021 championship season.